NIGERIA’S FLOOD CRISIS AND WHAT CAN BE DONE 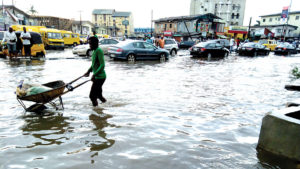 The declaration of “national disaster[1]” on the flooding in Anambra, Delta, Kogi and Niger States has beamed focus on Nigeria’s poor operational practices to reduce fatalities from extreme weather conditions.

In the National Emergency Management Agency Act  (NEMA) latest Situation Report, 12 states have been affected by the flood while 8 states have been placed on red alert[2]. According to the report, 327,052 people have been affected by the flooding in Delta, Kogi, Rivers, Anambra, Kebbi, Niger and Edo States with 77,460 persons internally displaced as a result of it. 70 persons have also died as a result of the floods while 60,2018 hectares of agricultural land have been destroyed.

While termed a ‘national disaster” it appears that the flooding may have been worsened by the poor urban planning of these areas, rapid population growth, climate change, indiscriminate waste disposal and poor/blocked drainage systems[3]. The dearth of flood data revealing the peculiarities of each flagged State also seems to have limited the National Emergency Management and other well- meaning environmental agencies to respond most effectively[4].

Other issues include health concerns, as there are fears that flooding in these areas could expose victims to various water-borne diseases even as certain parts of the country are currently struggling to contain a cholera outbreak. There are also food insecurity concerns owing to the destruction of arable land and fears that women and girls may be particularly vulnerable to sexual abuse in the designated National and Territorial Emergency Operating Centres (EOCs) that have been set up by NEMA to deal with the emergency.

The flooding has drawn attention to the deficiencies in the enforcement of some of Nigeria’s environmental laws which is a primary responsibility of National Environmental Standards and Regulations Enforcement (NESREA)[5] and the need to fund more research in this area and enable documentation to prepare NEMA and relevant stakeholders to mitigate, prepare and quickly respond to such situations.  For instance, in the European Union, Directive 2007/60/EC requires Member States to assess all water courses and coastlines at risk from flooding, map the extent of the flood, assets and humans at risk in these areas and take coordinated measures to reduce the flood risk[6]. The United States has also taken varying steps to reduce the consequences of flooding in some areas such as increasing the heights of streets in some vulnerable areas, having a network of pumps that force water of the streets in addition to having ambitious projects like raising the sea wall[7].

Internationally, it is doubtful if NESREA has been able to enforce Nigeria’s compliance with international agreements, protocols, conventions and treaties including those related to climate change, pollution, sanitation and other relevant environmental agreements in line with its functions[8]. While climate change may have been an attributing factor to the recent floods, the question still remains whether NESREA ensured that Nigeria has averted minimised and addressed the loss and damage associated with the adverse effects of climate change including extreme weather events as stipulated under article 8(1) of the Paris Agreement on Climate Change[9] that President Buhari signed in September, 2016.

Also linked to this are important issues of governance and accountability that raises questions. For instance, what proactive measures did State governments undertake after the Nigerian Meteorological Agency warned in July 2018 that the shift in the rainfall pattern could cause floods[10] and after it informed 11 states (Akwa Ibom, Bauchi, Benue, Borno, Cross River, Delta, Kaduna, Kwara, Nasarawa, Yobe and Zamfara) in August that there were at risk of imminent flooding[11].  It is also important for NESREA and NEMA to continue to engage the public on the dangers of indiscriminately disposing waste and building on high-risk areas to reduce casualties in future.

[2]  The report does not specifically mention the said States.

[7] The US Cities at risk of Flooding and How they Deal with It https://www.theguardian.com/environment/2017/aug/31/us-risk-flooding-harvey-boston-new-york-miami-beach

[11] There will be Flooding NiMet Warns 10 States  https://www.thecable.ng/there-will-be-flooding-nimet-warns-10-states